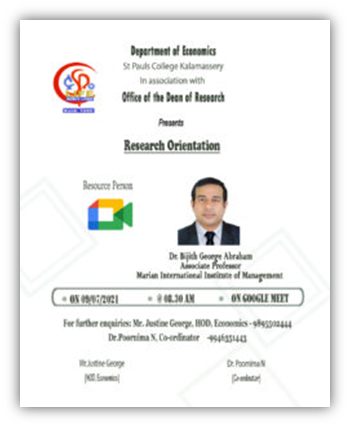 Webinar on Research Orientation in association with the Department of Economics, St. Paul’s College, Kalamassery. The session was handled by Dr. Bijith George Abraham, Associate Professor, Marian International Institute of Management, Kuttikkanam. It was attended by nearly 52 participants. The session was interesting and students could obtain a flavour of what research is all about and how to proceed with research.

Webinar on Basics of Research and Ethical Practices in association with the Department of Commerce, St. Paul’s College, Kalamassery. The session was handled by Dr. V. N.Suresh, Associate Professor and Research Supervisor, Department of Commerce, Maharajas College, Ernakulam. The session was attended by as many as 102 participants and was quite useful for the participants in understanding basics of research and the professional ethics to be maintained while doing research. 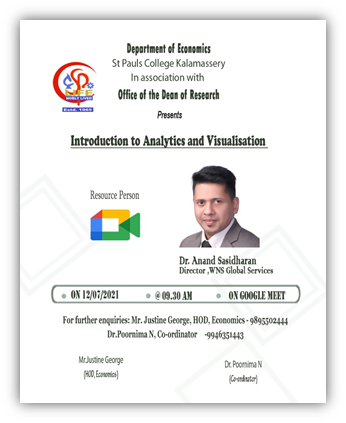 Webinar on Research Orientation in association with the Department of Economics, St. Paul’s College, Kalamassery. The session was handled by Dr. Anand Sasidharan, Director, WNS Global Services. It was attended by nearly 52 participants. The session was very informative and the participants could understand how to present data clutter free and how it makes a difference in understanding and interpreting the results. 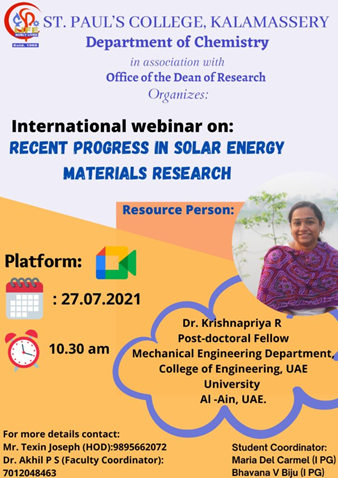 International webinar on Recent Progress in Solar Energy Materials Research in association with the Department of Chemistry, St. Paul’s College, Kalamassery. The session was handled by Dr. Krishnapriya R, Post-doctoral fellow, Mechanical Engineering Department, College of Engineering, UAE University Al-Ain, UAE. It was attended by nearly 100 participants. The speaker explained clearly about the different PV technology available in the market and also the recent ones gaining prominence. She also shared her research experiences and motivated students also. 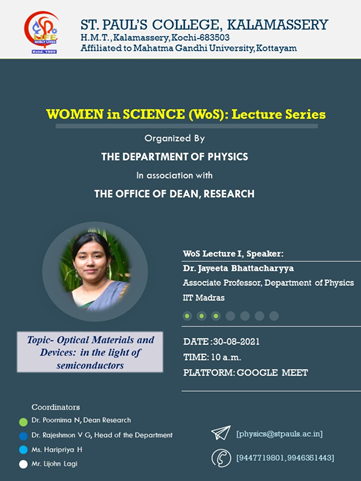 A session by Dr. Jayeeta Bhattacharya, Associate Professor, Department of Physics, Indian Institute of Technology, Madras as part of Women in Science (WoS):Lecture Series organized by the Department of Physics, St. Paul’s College, Kalamassery. The session was attended by around 100 participants from all over the country. The speaker started from the basics of quantum confinement in semiconductors and about how optical properties can be tailored. The session was received quite well by the audience who interacted with the speaker on various aspects related to the topic. 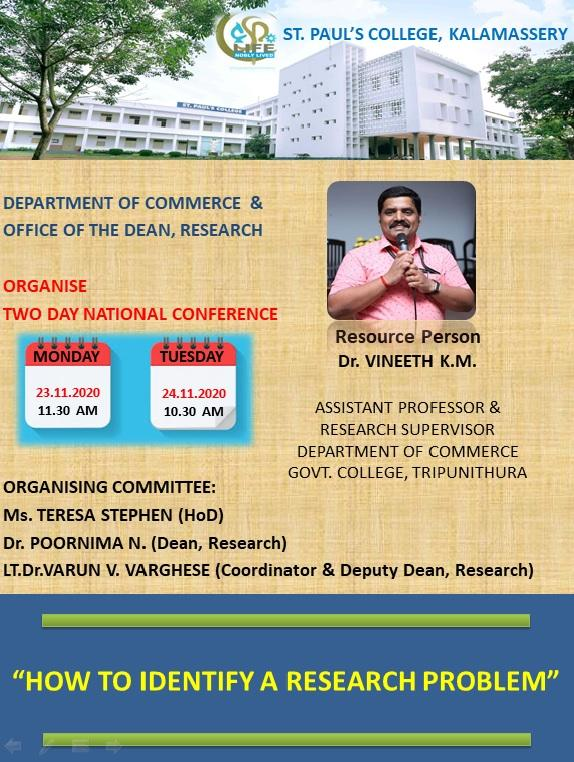 The activities of the Research Committee began with the submission of the DBT STAR College proposal. The Committee also oversaw the submission of one project each under Component 1 and Component 3 of the UGC STRIDE (Scheme for Trans Disciplinary Research for India’s Developing Economy) and 12 proposals under Component 2. Of the 12 proposals submitted under Component 2, two proposals – one by Dr. Rajeshmon V G, Dr. Poornima N (Physics) & Dr. Sajeesh T H (Physics department, St. Albert’s College, Ernakulam) and Dr. Pramada Ramachandran (Mathematics), were shortlisted for consideration to the next stage. A proposal was submitted under the DST FIST scheme with Dr. Poornima N as Principal Investigator. The proposal is under consideration. Dr Asha E Thomas of the Commerce Department was awarded a major project under the UGC IMPRESS Scheme and another one under the RBI. Dr Sunita Treasa George of the Chemistry Department was awarded a major project by the Directorate of Environment & Climate Change, Government of Kerala.

On the whole, it was a year of achievements for the College with respect to Research and it is expected that this tradition will be maintained in the years to come.

In this Academic Year four Ph.D. holders and one PDF holder were honoured by giving memento and their research presentations were arranged. On 26/06/2018 Dr. Asha E Thomas was honoured for completion of Postdoctoral fellowship, Dr. Savitha K S and Dr. Pramada Ramachandran from the Mathematics department were honoured of securing Ph.D. degree. Manager Rev. Fr. Felix Chackalackal presented mementos to them.

On 25/09/2018, Dr. Binu P C [Librarian] and Dr. Neena George [Department of Chemistry] were honoured for securing Ph.D. degree and their presentations were held in the Seminar Hall.

The Research Committee has a practice of organizing talks by faculty members who are Ph.D. holders on their research topic. Two talks were organized, one by Dr. Poornima N, on 16-12-15 and the other by Dr. Priyesh K V on 19-01-16 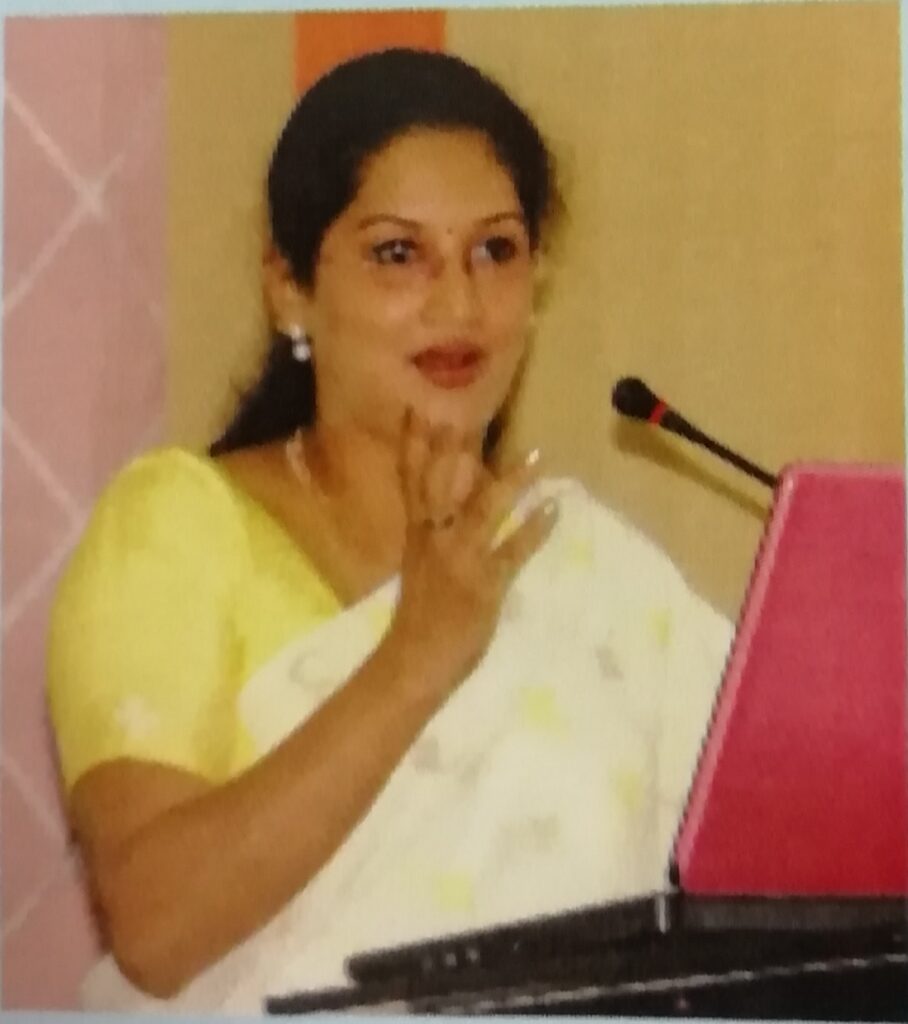 The research committee of St.Paul’s College organized classes by various teachers as part of motivating inter disciplinary research. Dr.Asha E.Thomas, Department of commerce who was an international flair awardee shared her experience in the University of Roehampton,London.